Turtle season is in full swing at Raine Island National Park (Scientific) at Queensland’s northern tip, with more than 20,000 green turtles waiting in the sapphire waters to nest on newly profiled beaches.

Minister for Environment and the Great Barrier Reef Leeanne Enoch said the Raine Island Recovery Project team was excited to see early results from their efforts to restore and maintain the island’s vital conservation role.

“It’s a great boost to actually see turtles nesting on the beach areas the team worked so hard to re-profile, and it highlights that this work is making a real difference.”

Queensland Parks and Wildlife Service (QPWS) Raine Island Recovery Project Manager Tina Alderson reports that it is shaping up as a cracker of a season on the remote island.

“We’ve just finished the second trip of this nesting season as part of the five-year recovery project,” Ms Alderson said.

“More than 20,000 turtles were aggregating around the island in near-millpond conditions in early December. In drone photos, they looked like stars in a dark sky.

“During the 14-day trip to the island, rangers, researchers and Traditional Owners looked at the nesting success of the turtles in the areas where sand re-profiling works were done with heavy machinery this August.

“We’re already seeing some hatchlings this season, and the team was excited to see that the best nesting success on the island was in the re-profiled part of the beach.

“The team was up all night counting the number of nesting turtles,” Ms Alderson said.

“They also rescued 170 breeding female green turtles – either from being stuck in beach rock, trapped under small cliffs or from heat exhaustion on the beach.”

Counting and rescuing turtles were just part of the work. In addition,

A photographer was on board to record the astounding natural spectacle and the team’s efforts.

It’s a great boost to actually see turtles nesting on the beach areas the team worked so hard to re-profile, and it highlights that this work is making a real difference

Minister for Environment and the Great Barrier Reef Leeanne Enoch 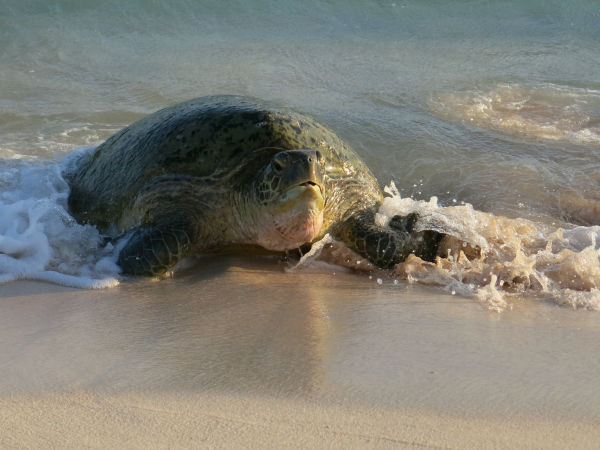 Raine Island, on the remote northern tip of the Great Barrier Reef, is the breeding ground for one of the world’s largest populations of green turtles.

During the nesting season, as many as 60,000 female green turtles swim thousands of kilometres from their feeding grounds in Indonesia, Papua New Guinea, the Torres Strait and the West Pacific, to this tiny island to lay their eggs.

However, this amazing natural event is under threat and the island’s role as a turtle sanctuary is in danger of collapse.